We climbed the Ruins in Coba Mexico! Tulum! 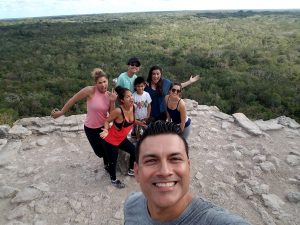 Vanesa and I visited the Coba Ruins back on New Years 2018 and we really wanted to come back with the kids because we knew they would enjoy it. We really did not know when this would happen but as fate would have it, because of Brian from The Tulum Luxury Collection, he invited us to return in February and bring our kids. Our wish was coming true! It is strange how the universe works 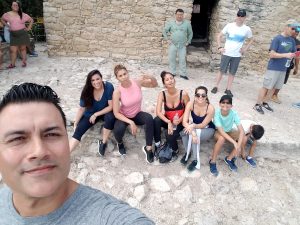 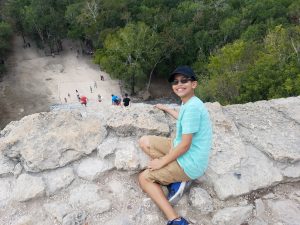 We got up early in the morning because Vanesa and I saw from our previous experience that if you get there anytime after 1030am, it turns into Disneyland. This time Rony, Gwendolyn, and Nora joined us. When we say, Join Our Vida Loca, we mean it! We left Soliman Bay by 845am and got to Coba by 930am. It is a quick, safe, and easy drive. There are convenient signs that will keep anyone from getting lost. When we arrived we were so happy to see that there were hardly any cars in the parking lot. This meant that the biggest ruin would be empty and easy to climb without a lot of people around. After paying our entrance fee, we rented some bikes so we could bike through the jungle. Our suggestion is to rent bikes and ride all the way to the end and work your way back to the front. Since we had Nico and he was not big enough to ride a bike, we got him a Rickshaw and Nora joined him on the ride. We had such a blast riding because I, who take my portable speaker everywhere, pulled it out and started playing The Sound of Music and Grease soundtrack. We were all on bikes, riding along through the jungle and singing at the top of our lungs. We surprised a lot of people as we passed them since we were belting out, “Do Re Mi” and “Grease Lightning”. Some of them actually joined in. Another person thought we were a singing group! We finally arrived to the temple you can actually climb. Our tour guide gave us a quick summary of the history and off we went. He made sure to tell us not to perform any sacrifices as these ended long ago. I thought Nico was going to be a little scared from the climb but I could not have been more wrong. He took off and I had to keep up with him. David wasn’t too far behind. There was a point, about three quarters up, where Nico stopped and looked around and was slightly nervous about how high he was. He got over it in about 5 seconds and continued to climb. When we got up to the top, I saw an accomplished and proud Nico. He got to the top, turned around, put his fist on his hips, while breathing heavy, and was happy to see what he had just done. I saw he was proud of himself. He enjoyed the view of the whole jungle from where he was standing. He saw David and, of course, started teasing him that he got up there faster than his older brother. Vanesa and the rest of the girls finally joined us at the top of the temple. We all shared a wonderful moment up there admiring the view and taking pics. It was great being there all together- our family and these wonderful ladies.  Vanesa and the kids really didn’t know Nora,  Gwendolyn, and Rony very well before this trip. They knew them mainly because they all attended my gym, The Most Hated Gym, as members, but they never spent any time with them outside of the gym. Let me tell you, it was amazing getting to know them and it truly was special having this experience with them in beautiful Tulum. They became friends very quickly and hope to have more adventures with them!  After taking some awesome Instagram pictures and selfies (you know I love that) we made our way down, jumped on our bikes and started making our way back to the front. We stopped by more ruins and learned many interesting details regarding the ancient Mayan traditions and culture thanks to our wonderful tour guide, Eduardo, who is Mayan himself. He proved it by showing us a pic of the side profile of an ancient Mayan and then he showed us his profile…they had the same nose. He also pulled out his ID and showed us his Mayan name and he shared with us some of his family’s traditions. David really seemed to enjoy his stories and learning about the history.

When we were done, we were starving and decided to go to a restaurant right outside the entrance at a place called El Fasian. The guacamole and chicken taquitos were pretty tasty and very reasonable. For a group of 6, we paid $40, yes, seriously!  Bring pesos though! If you don’t, the exchange rate is not very good.  After we were done stuffing ourselves we made our way back to Soliman Bay with new memories, new experiences, with new friends. Que vive the vida chula! 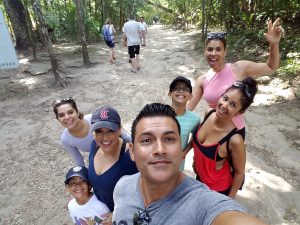